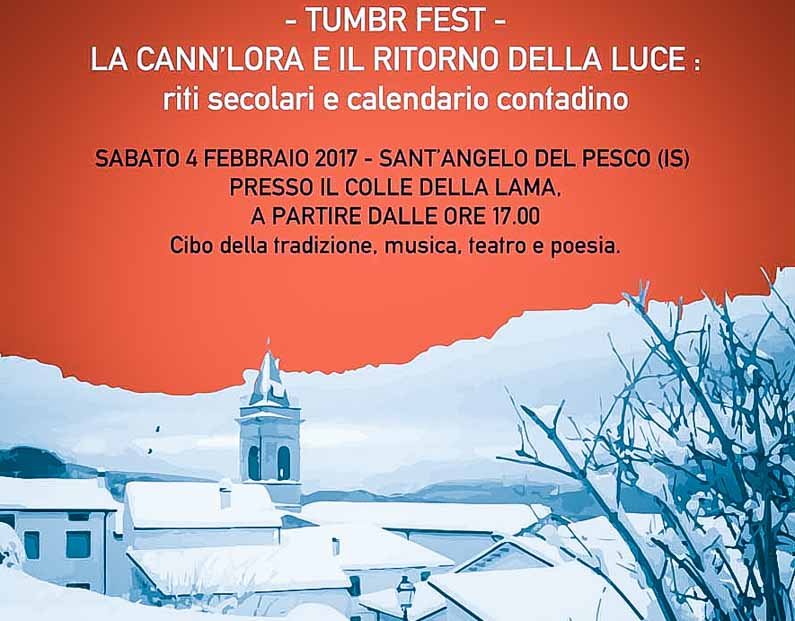 Tumbr fest - Cann’lora and the return of light: secular rites and peasant calendar

Tumbr fest takes its name from the old unit used during the reign of the two Sicilies and set off in 1861, following the unity of Italy. The festival was born with the intention of bringing back ancient ways to preserve them from the ‘oblivion to which they are destined’. Uses, customs and traditions are almost completely lost. This winter will be a kind of pill to the summer appendage of the festival.

“With the fire comes the spark of light of humanity and with the cooked food the relief from the need that prevents reasoning. With the temporary armistice of hunger, with the fulfilment of digestion, with the sense of prolonging life comes the story and the story lifting the head to heaven. Man becomes a man with the spark of the story seized in hell.”

From the presentation of Jesus to the temple through the purification of Mary until we arrive at the ancient Pagan tradition of Lupercali, we will try to bring together ancient knowledge and stories in the presence of the fireworks and candles of tradition. Starting from two straw-hammers with a fireplace, which has preserved their burden of minor historical heritage, and gathering people around some fires, in the ancient nucleus around which our little country was born, we will try to fight the monotony of winter and turn on the country for one night. The Colle della Lama with its spiraling roads that circulate in a circular way that extends to the original religious structure of which remains a sketch of the name of a street (Via Chiesa Vecchia) will be the theater of this event, which has the main purpose of breaking the monotony given by the rigors of winter, fighting it with conviviality and culture. February, whose name derives from the Latin February, which means “purifying” since in the Roman calendar in February it was the time of purification rituals, it is not known to be one of the best, with its rigours and snow, and has always been beloved, despite the s party. Antonio Abbot, the entry of the carnival, the killing of the pig. Waiting for better times in the past they spent the days closed in the house to spy, occasionally, the possible “moves” of time. The white reigned as today unconventional and often came out of the windows or passed under white and unspoiled galleries, without the tv in the house to fuel the discomfort in a population hardened by adversity like war and poverty. Candlestick in this falls to the brush, indicating to the grower the predictions of the “v’rnata” and its effective duration, according to which to organize with the new seeds and the remaining stocks. The lunar calendar is among the things we have forgotten along with respect for the nature that the peasant, the big shoe and the brain up, never stopped listening and watching.

How many things have we buried under the ashes? Many, among which many proverbs. So be prepared to suffer a little bit of the bug and pull out the ashes of childhood memories and potatoes, just as grandma did once. We offer culture, music, theatre, poetry, fire, food and wine to fight the impotence that has taken over countries like ours. A country wants it. 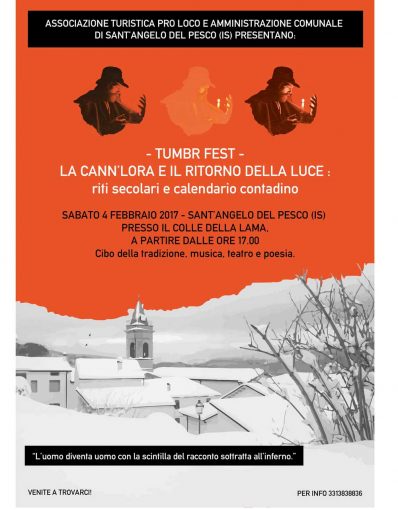 I attach the poster, characterized by an original monologue divided into two parts (Christianity and Paganism), written for the occasion of the Roman theatre author Valeria Belardelli and interpreted by Manuel D’Amario, Abruzzo actor emerging in the panorama Italian.

The opening debate will be attended by Franco Valente, & include a concert of the folk-rock blues singer Adriano Tarullo, originally from Scanno (AQ). And a reading of Franco Arminio’s “Dreamy Mouse and Other Animals of the Country” by Manuel D’Amario followed by the poetry of Eugenio Cirese and Gustavo Tempesta Petresine.

Then traditional food such as cazzariell and beans and impressive potatoes accompanying a few (a few) potatoes to ash and pizza d grandign cooked to the cup, prepared in the fireplaces of the strawberries made available.

The frame is the charming hill of the Lama, home to the country’s first living nucleus.

Any cookies that may not be particularly necessary for the website to function and is used specifically to collect user personal data via analytics, ads, other embedded contents are termed as non-necessary cookies. It is mandatory to procure user consent prior to running these cookies on your website.