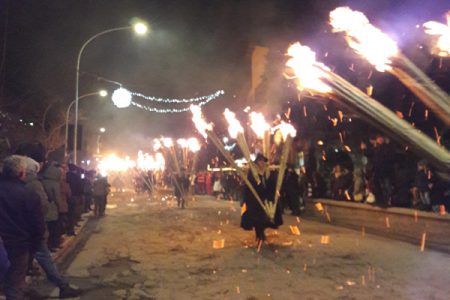 On the 8th of December I finally saw l‘ndocciata, Angone’s most famous annual event. Believe it or not, I’d never witnessed it. High time then…

It’s the biggest ‘festival of fire’ in the world, ‘una scia di fuoco’, and allegedly the oldest – though impossible to know that for sure. Hundreds of men and boys, belonging to 5 contrade (neighbourhoods), don heavy black woollen cloaks and wide brimmed hats and load onto their shoulders enormous torches made from silver fir. 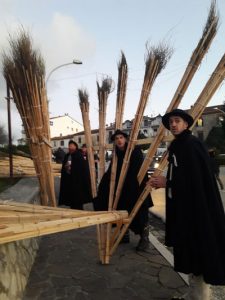 Preparations start in early spring when fallen branches are collected and stacked for drying – amazingly no trees are cut down to supply the 1200 torches, and at the same time, it’s good forest management. The silver fir is cut into pieces and bound together with 5 ties to create a torch. Burning for well over an hour, and between 2 and 4 meters high, they weigh up to 7k, and are carried single, double, and upwards, in even numbers.

Some of the big ‘fans’ of torches are carried by 2 men together, but most are carried singly, including the enormous fan of 24 that I saw being prepared on the day. Dried broom, tied to the top, is set alight with petrol to start the flames. Days and days of preparation, and years of experience passed down generations are required to pull of this event – security and risk assessment being of considerable importance.

The festival’s origins are ancient. The Samnite tribe, who populated Molise prior to Roman domination, used lit torches during tribal shifts that occurred at night. Later, torches illuminated a path from the fields to town for midnight mass on the 24th, the fire and strong smell of burning resin also serving to scare off wild animals. 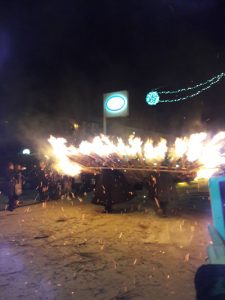 In honour of these ancient traditions, a festival came to be established on the 24th of December when at the end of the procession, the lit torches were piled on a bonfire symbolising the burning of rivalries and feuds. In medieval times, young men vied to make the most spectacular torch, offering it up for show under the window of a favoured girl. If she were minded to accept his advances, she’d look out appreciatively, or, if her father disapproved, he’d douse the flames (and the young man’s ardour) with a bucket of water! 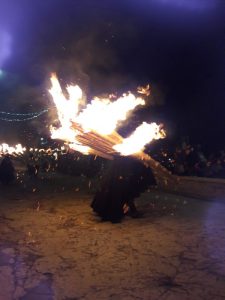 In 1996 Pope Giovanni Paolo II invited the Agnonese to stage the event in St Peter’s square on the 8th of December, for la festa dell’immacolata, and la ‘ndocciata di Agnone became one of Italy’s 34 “Patrimoni d’Italia per la Tradizione”. Since then, it has been held annually in Agnone on December 8th, when thousands pile into town to witness it. On the 24th , a smaller, more intimate procession for the townspeople is still held, preceded by a presepe vivente (nativity play). 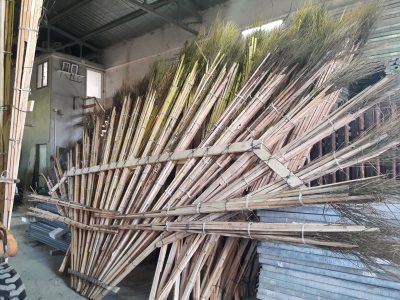 On the morning of the 8th, I joined the men of the Campamonte e Capaballe contrada as they prepared. The torches are kept carefully hidden from view until the last moment– each contrada aiming to have the biggest and best. 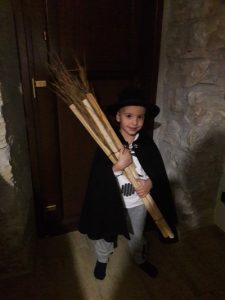 Porters are chosen at an early age; carrying a single unlit torch from as young as 5, moving onto a lit torch at around 9 or 10, and then progressing upwards, subject to strength and ability to remain focused and clear headed. The porters are not otherwise ‘trained’, those carrying the heaviest loads generally come from occupations whose daily toil prepares them well.

The contrada is made up of about 200, with half carrying torches, others organising and planning, and some joining the women and children as figuranti – dressed in traditional costume, carrying utensils and items from times gone by. 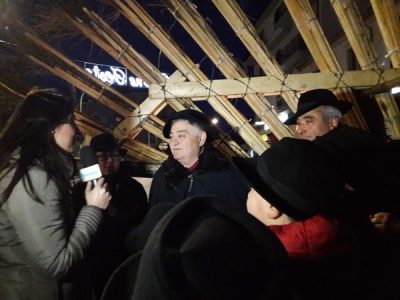 We all waited as it got dark and the porters assembled. Finally, at the sounding of the bell, the procession started with the smaller boys until all torches were lit and they paraded through the town, everyone lining the streets. They were really close and it got very hot – which was a blessing as we had been waiting in the cold for a fair while. The porters twirled and spun around, causing sparks to fly and whipping up excitement. The men of the contrada kept me near, which was fantastic, as I was able to follow along with the procession and end up with them as they loaded their torches onto the huge bonfire - il falò della fratellanza, symbolizing purification. Say goodbye to ‘le cose brutte’ among the community and celebrate the beginning of the New Year together. It’s impossible to convey just how special it was. I’d heard all about it, and of course knew I’d need see it one day – but I was not prepared for just how thrilling and moving it was. 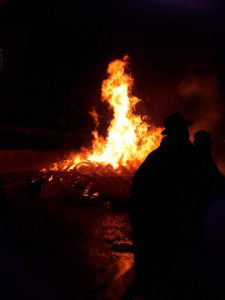 A community bound by a powerful tradition, proud of its heritage, all coming together to put on a show requiring months of preparation, supreme dedication and care, and, not to mention, enormous shows of strength! When we all piled into one of the bars at the end to shared a beer, I knew I’d have to find a way to get back next year.